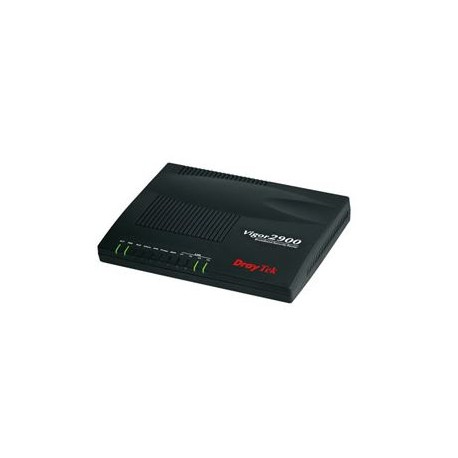 The Vigor2900 is a high-performance firewall and VPN device, providing up to 16 simultaneous VPN tunnels out of the box - there are no additional upgrade costs/liences for the full capacity and no client licences are required - VPNs are supported from teleworkers or LAN-to-LAN application. In additional, full firewalling is provided as well as Internet sharing capability (NAT or fully routed) for your network. The Vigor2900 is a comprehensive and feature-packed firewall, having passed the independent certification for SMB Firewalls.

Ethernet WAN Interface
The primary 'WAN' interface (the connection to the outside world) is 10/100BaseT ethernet. This can connect to any Ethernet based router IP or Internet feed which might typically be fed via Leased Line, cable modem, ADSL, Satellite system - anything which is then terminated in Ethernet.

LAN-to-LAN VPN Services
A VPN (Virtual Private Network) is a method for using a public network (Internet) to carry private data between offices or from teleworkers to office. The Vigor2900 can act as a VPN concentrator (endpoint) for up to 16 remote sites - i.e. running 16 simultaneous tunnels to remote locations; either single teleworkers or remote networks/offices. The VPNs use induststry standard protocols including IPSec, PPTP and with high level encryption including 3DES, AES and MPPE. No additional licences are needed for users. Cross compatibility with with common Microsoft Windows and MacOS VPN software clients is supported as well as compatibility with many other 3rd party VPN vendor's products, including Cisco™ Pix, Nokia™, Sonicwall™, Checkpoint™, ZyWall™ and Watchguard™.

Vigor2900 Enhanced Firewall
The Vigor2900 includes full packet-level firewall facilities, not just the inherrent 'NAT' security and port-blocking of other routers. The router also employs keep-state packet recording; put simply, this means that when a packet is sent out, a reciprocal record is kept to allow a packet coming back in the opposite direction, but a default 'deny' policy means that any packet arriving which appears unsolicited won't get through. The Vigor2900 series also features automatic selectable protection from Dos/DDos (Denial of Service/Distributed Denial of Service) attacks and IP anti-spoofing. User-definable filters also allow you to add additional protection to your connection (see right). For added confidence, potential or foiled attacks are logged and can be reported via the router's syslog facility or emailed to you by the router.

Selectable QoS Assurance
The Vigor2900 supports selectable QoS (Quality of Service). This enables you to select specific protocols/services to have guaranteed levels of your Internet bandwidth. For example, if you need POP3 email to have priority, you could specify that 50% of your available bandwidth is guaranteed for POP3 email. When the bandwidth is not being used by POP3, it is still available for all other traffic,. The Vigor2900's QoS facility provides flexibility - you can set several groups of services to have different priorities, data directions and bandwidth reservations.

Virtual LAN (VLAN) & Bandwidth Throttling
The Vigor 2900's VLAN facility enables you to segment each of the router's four RJ45 Ethernet ports, so that each is a separate virtual LAN. You can create VLAN groups which include or exclude any of the ports so that groups, departments and companies can communicate with each other, or not. For example, two companies could share the same broadband feed, without having access to each other's networks. For more details of VLAN, see here. The 'Bandwidth Throttling' feature lets you set a maximum throughput for each of the Vigor's four Ethernet ports, which can prevent a particular user (or segment) from taking all of your bandwidth.

Print Server
The USB port on the back of the router allows you to connect most standard USB based printers and then print to them from any Windows98SE/XP/2000 PC, using built-in O/S support from any application, thus not needing to have a particular PC provide the printer sharing to its peers.

Windows Syslog Tool
The Vigor2900 comes with its Syslog tool; one or more PCs can run this syslog tool so that route status and activity is continuously logged. This includes information about individual PC/User activity as well as firewall rule matching and general router operation. Syslog programs are available from 3rd parties for other Operating Systems too. The Vigor2900 series also supports SNMP (with MIB-II), allowing an SNMP client to monitor the router's LAN activity, again locally or remotely.

Wireless Interface
The Wireless interface on the Vigor2900G enables wireless connection of PCs and supports the new 802.11g high-speed wireless protocol, which is up to 6 times faster than the previous 802.11b protocol, providing a total wireless bandwidth of up to 54Mb/s. Twin extra-gain aerials provide an additional gain, ensuring maximum coverage range and signal diversity (higher-gain aerials are available as an optional extra). The Vigor2900G also has a built-in 4-port Ethernet switch (expandable) for wired devices so that you can connect wired 10/100BaseT PCs too.

Ethernet port throttling. Each of the four 10/100BaseT Ethernet ports can be limited to a maximum throughput (RX and RX selectable). e.g. Port 1 could be set to provide max 256Kb/s to prevent individual users, or LAN branches from consuming too much of your broadband bandwidth.

Printer Port - built-in USB port. Compatible with most standard printers with a USB port and any Windows 98SE, 2000 or XP client PC.

Time Schedules for enabling/disabling these restrictions

Dial-in or dial-out, LAN-to-LAN or Teleworker-to-LAN

Wireless range up to max 200M (open space) and typically up to 50M direct line of sight in buildings/homes. Performance will vary considerably depending on environment (obstructions, walls, ceilings, building type etc.)

Twin aerials to give best coverage and diversity

Compatible with any client device complying with the 802.11g Protocol

Backward compatible with 802.11b devices

WLAN Time Schedule - Wireless can be disabled at certain times of day (e.g. out of hours)